Roberto (Obet) Verzola: The known and the unknown 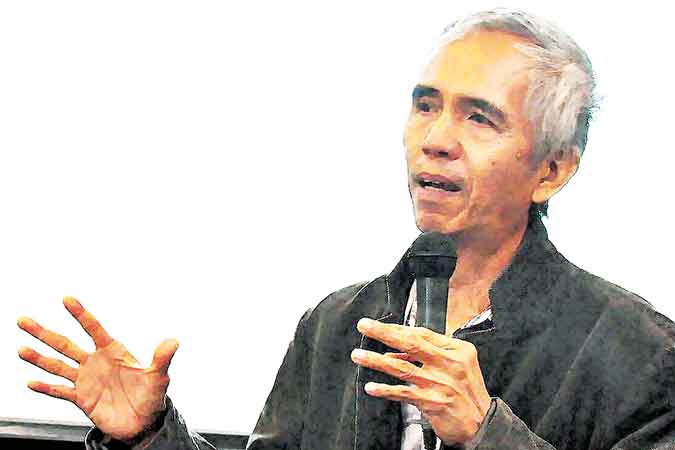 Many of Obet’s friends and colleagues have written fine, glowing tributes about his life. But there’s more to know about him, considering that he shied away from publicity and preferred to work in the background. For Obet, what mattered was the spread of a powerful idea, not the projection of his persona.

His many different circles are familiar with Obet’s story arc. He belonged to the first batch of the Philippine Science High School (PSHS), wherein he graduated salutatorian. He and his illustrious batch from PSHS (including Rey Vea, the class valedictorian, the late Mario Taguiwalo, and Antonio Tujan) became the epitome of scholarship and deep intellectualism in the movement. They joined Samahang Demokratiko ng Kabataan (SDK) and reinforced the image of SDK as sophisticated and elitist. Nothing wrong about that. My departed friend Tolits Añonuevo, likewise a graduate of PSHS and founding president of Action for Economic Reforms (AER), would remind us then that students of the University of the Philippines (UP) objectively belong to la crème de la crème.

Upon the declaration of martial law and the attendant banning of activist organizations and the curtailment of civil liberties, Obet and many activists joined the underground movement. He was part of the Manila-Rizal region of the Communist Party of the Philippines and the editor of the revolutionary publication Taliba ng Bayan. In October 1974, the military swooped down on Obet and his comrades from the Manila-Rizal regional committee. They were heavily tortured. Obet absorbed different forms of torture, including the dreaded electric shock treatment. He described his shriek of terror as akin to the shrieking of a pig being slaughtered.

Obet spent three years in prison. Upon his release, he returned to the university to complete his Bachelor of Science degree in electrical engineering. Still, he continued to fight the Marcos dictatorship, this time in the legal struggle that was inextricably linked to the underground movement. He returned to scholarly pursuits, and his after-prison life took the course of promoting science and technology for the people. Henceforth, he became engaged in the making of radio frequency power amplifiers, information or digital technology, introduction of the personal computer and e-mail, etc. He did all this without seeking commercial gain but to serve the interest of humanity.

My friend Tolits remarked that Obet would have become a milyunaryo if he had pursued the profit motive. Surely, there’s nothing wrong about getting rich. To paraphrase Adam Smith, it is but ok that our well-being is served not from the benevolence of the butcher and the baker (or the scientist and the wonk) but from their regard to their self-interest. I shared Tolits’s comment to Obet. Known for having a serious, contemplative, and humble mien, Obet nevertheless had a surprising sense of humor. And his response was: Ano tingin mo sa akin, hindi milyunaryo? (“Don’t you think I’m not a millionaire?”)

Obet was engaged in many other things. He used his scientific and technical knowledge and skills to promote reforms on a wide range of issues: intellectual property rights, access to the internet and competition in the telecom industry; electoral reforms and election automation; renewable energy, green technology and industrial policy; food security and agricultural productivity.

In his advocacies, he welded theory and practice. For instance, he himself became a farmer and set up a demonstration farm for sustainable agriculture in the province of Quezon. He joined farmers belonging to the social-democratic association called Pakisama to adopt sustainable, environmentally friendly farming. (Although Obet was affiliated with the national-democratic movement, never did this become a barrier for him to be identified with other competing political forces like the social democrats or the popular democrats. He had become indifferent to political or ideological labels.)

Not known to many was Obet’s foray into economics. He was critical of mainstream economics — or neoclassical economics and its discredited variant called neoliberalism. He presciently argued that mainstream economics — essentially the study of efficiently allocating scarce resources — is no longer sufficient to explain what he called the “economics of abundance” that characterizes the digital age.

However, he held the view that to convincingly criticize neoclassical economics, he must first have a solid grasp of what it is. Thus the humble, inquisitive Obet enrolled at the UP School of Economics for postgraduate studies. Obtaining the degree did not matter to him. What was essential to him was to quench his thirst for knowledge in economics and engage the professors in a serious conversation. Rarely could you find a student personified by Obet being given the opportunity to address a lecture not only to his classmates but also to the senior professors.

In spite of being critical of mainstream economics, Obet upheld its core tenets that serve values like equity and sustainability. For example, even as he was for progressive taxation of income and wealth, he likewise argued for higher taxes on consumption. He contended that over-consumption, especially of valuable scarce goods like oil and water, is harmful to sustainable development. This position defies the thinking of the Left and popular opinion.

Obet also had a libertarian streak, usually associated with economic conservatism. He, for example, favored the residents living near Taal Volcano to have the freedom to return to their homes, based on their calculation and management of risk. Again, Obet’s view went against conventional wisdom.

Obet was a pillar of Action for Economic Reform (AER). He was a vital cog of AER’s industrial policy team. He supported AER’s core programs and issues, including the controversial ones like tax reforms.

While we had debates — say, on letting residents make the decision to return to their homes despite the risk of another volcanic eruption — we mutually valued respect and pluralism. (Obet’s position on this issue came out as a Yellow Pad column, titled “Taal: probing the judgment of scientists and the power of bureaucrats,” Feb. 2, 2020, BusinessWorld. This was Obet’s last published piece.)

Obet was engaged in different AER activities. He joined out-of-town trips like visiting remote towns in Samar and Leyte. He opted to travel despite the physical discomfort and pain. At that time, his chronic illnesses were slowing him down, but Obet brushed them off to continue being productive.

He likewise attended AER dinners and other gatherings like videoke sessions. He enjoyed being a listener. That was why he and my late wife Mae enjoyed each other’s company: Mae was chatty, and Obet was attentive, regardless of the topic.

What Obet enjoyed most was being with the millennials. One of his last acts was to give a lecture to undergraduate students at the School of Economics; his topic was about pricing and fairness.

One of the many articles he wrote was about martial law, which he principally addressed to the millennials. (“Millennials: rendering judgment on martial law, choosing advocacies,” Sept. 25, 2017, BusinessWorld.) This is a must-read essay not only for the young but also for everyone, especially for Obet’s comrades in the Left.

Here he wrote: “I want to forgive. I need to forgive not for the sake of the Marcoses, but for my own sake.” Obet had forgiven Ferdinand Marcos and his torturers, but he likewise said that we should not forget the horrors of martial law, and we should continue fighting the return of dictatorship and the Marcos family.

That Obet was able to forgive even as he remained committed to the struggle for change attests to a profound and candid person no longer afraid to face his destiny, a man of courage ready to face his mortality. Obet will rest in peace.